from II - Logic and language 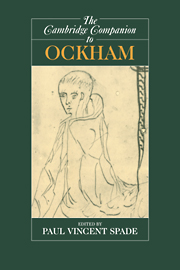 from IV - Logic in the high middle ages: semantic theory

from IV - Logic in the high middle ages: semantic theory