from Part II - Overview of Approaches to the Study of Expertise: Brief Historical Accounts of Theories and Methods 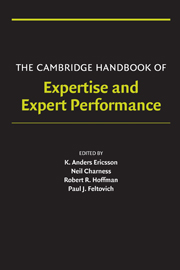