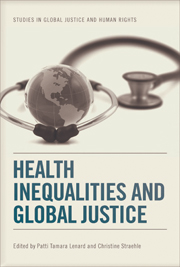 from Part 2 - Who is Responsible for Remedying Global Health Inequality?