from PART ONE - THE TEXTILE HEARTLANDS OF THE INDUSTRIAL REVOLUTION 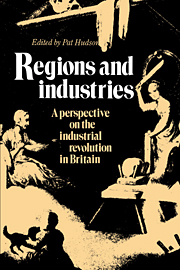