from PART I - Standardization and the State

from Part III - Regional Patterns in the Law of Water Services

from Part II - International standardisation and the World Trade Organization 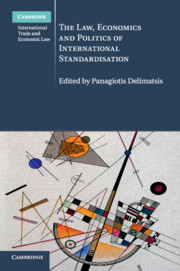