from Part I - SENATORIAL POLITICS AND RELIGIOUS CONFLICT 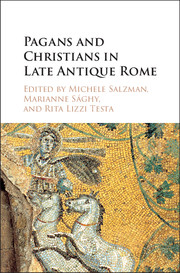