from Part II - Mapping the politicisation of European integration

from Part I - Theory and methods

from Part III - Driving forces and consequences of politicisation 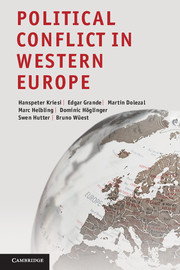