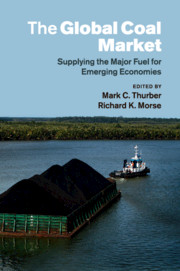 from Part V - Conclusions and implications

from Appendix - A statisticalreview of coal supply, demand, and transport in China