from 9 - Economic, Social and Cultural Rights 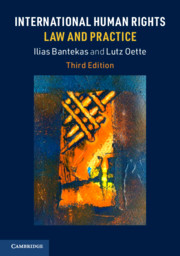 from 4 - The United Nations Charter System

from 15 - Victims’ Rights and Reparation