from Part I - Developmental Dyslexia across Languages and Writing Systems 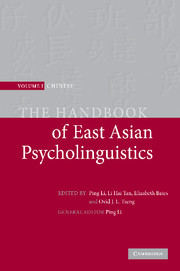