from Part 1 - Pondoland and the Eastern Cape

from Part 3 - Fort Hare and the University of Cape Town 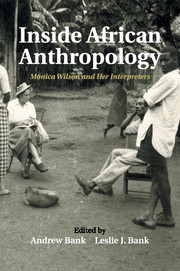