from Part I - GPS for Primatologists 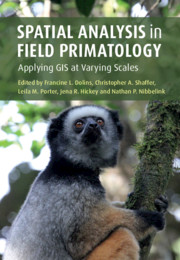 from Part IV - Conservation of the Pitheciids