from Part I - Producing the Text

from Part III - Methods, sources and approaches to the history of the book 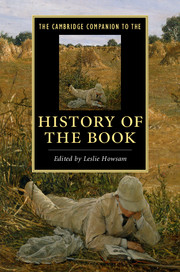