from Part II - The Use of Economics in International Trade Disputes: Economic Versus Legal Thinking 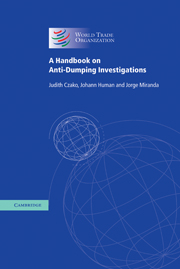