from PART II - ANALYSIS AND EXPERIMENTATION

from Part I - Darwin’s theorising 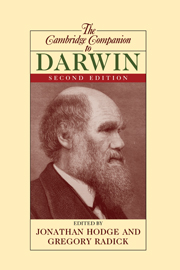