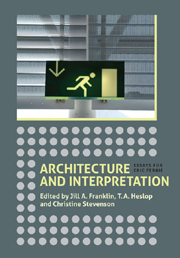 from Incitements to Interpret in Late Antique and Medieval Architecture