from Mapping Knowledge: The Visual Representation of Ideas

from Mapping Knowledge: The Visual Representation of Ideas 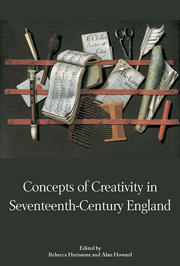 from The Performer as Creator

from Creative Identity and the Role of Print Media

from Imitation and Arrangement

from Creative Identity and the Role of Print Media