from Part III - The Global Impact of Canadian Constitutionalism

from Part I - National Constitutions and Sociological Method 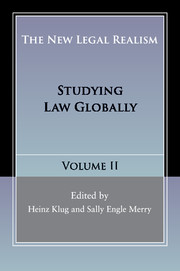