from A - The Crimes

from 6 - The Corporation and Crime

from Part I - Crimes against humanity 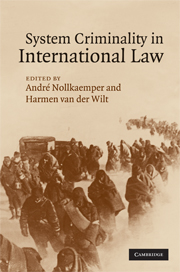