from Part II - Conceptual Analysis and the Naturalistic Challenge

from Part I - Neo-Kantianism and philosophy 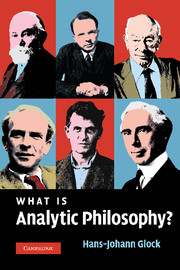