from PART I - HODGE THEORY AT THE BOUNDARY

from PART I - HODGE THEORY AT THE BOUNDARY 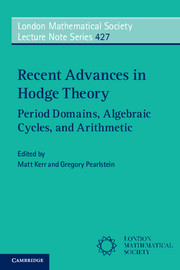 from PART III - THE ARITHMETIC OF PERIODS

from PART III - THE ARITHMETIC OF PERIODS