from Part IV - Agents and Practices 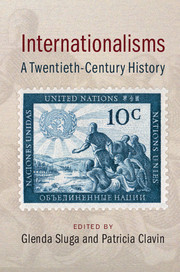 from Part I - Inventing Twentieth-Century Internationalisms