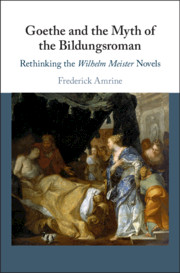 from I - Wieland and Herder

from IV - Leibniz, Spinoza, and Their Legacy