from Part III - Anxieties of Governance 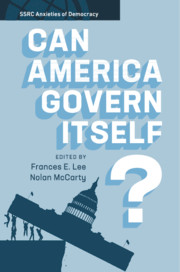 from Part II - Continuity and Change in Party Organizations