from Part III - Perplexities in Jurisprudence

from Part II - The Common Law Method in Intellectual Property 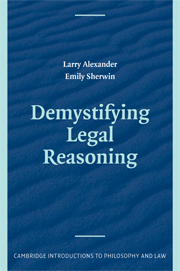