from Part I - Setting the Framework: Criminological, Historical and Domestic Perspectives 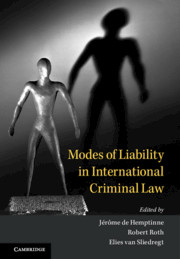