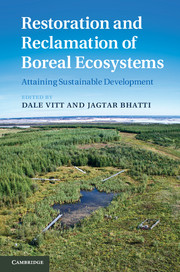 from Part II - The challenges of reclamation in boreal ecosystems

from Part II - The challenges of reclamation in boreal ecosystems