from Part I - Theory and Critical Reception

from II - POLITICS OF THE CINEMATIC CENTURY 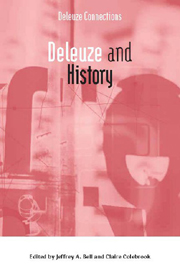