from Part I - Britain in Turin: Politics and Culture at the Savoy Court 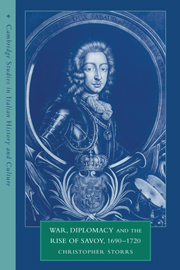