from Part III - Synge on stage

from Part II - Pinter and Performance 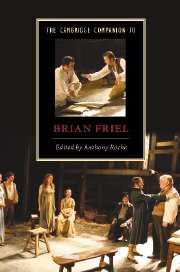 from Part 2 - Pinter and performance