from Part IV - Biochemistry and developmental biology of fungi

from Part I - Nature and origins of fungi 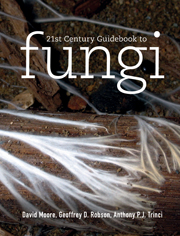