from Part One - Enlightening the Masses: the Public Library as Concept and Reality

from Part Six - The Rise of Professional Society: Libraries for Specialist Areas 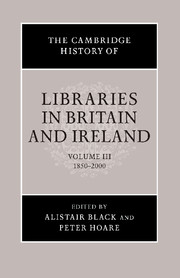 from Part Two - The Voluntary Ethic: Libraries of our Own

from Part One - Enlightening the Masses: the Public Library as Concept and Reality