from PART I - CONGRESSIONAL POLICY MAKING IN A POLARIZED AGE 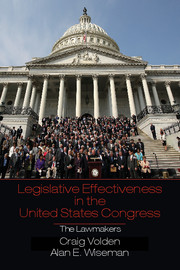