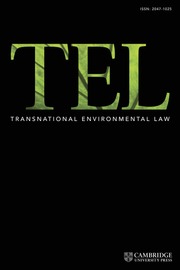 In her response to my case comment in this issue of Transnational Environmental Law, Laura Burgers purports to disagree with my analysis on two points. Firstly, she suggests that we disagree on the method that a court should use to interpret the duty of care of corporations on climate change mitigation. Secondly, she disagrees with each of the four inconsistencies that I identify in the decision by the District Court of The Hague (the Netherlands) in Milieudefensie v. Royal Dutch Shell. In this rejoinder, I respectfully disagree with her characterization of our disagreement.

This is an Open Access article, distributed under the terms of the Creative Commons Attribution licence (http://creativecommons.org/licenses/by/4.0/), which permits unrestricted re-use, distribution and reproduction, provided the original article is properly cited.
Copyright
Copyright © The Author(s), 2022. Published by Cambridge University Press.

In her responseFootnote 1 to my case commentFootnote 2 in this issue of Transnational Environmental Law, Laura Burgers purports to disagree with my analysis on two points. Firstly, she suggests that we disagree on the method that a court should use to interpret the duty of care of corporations on climate change mitigation. Secondly, she disagrees with each of the four inconsistencies that I identify in the decision by the District Court of The Hague (the Netherlands) in Milieudefensie v. Royal Dutch Shell.Footnote 3 In this rejoinder, I respectfully disagree with her characterization of our disagreement.

On the first point, I agree with Burgers that ‘fuelling climate change’ may be ‘tortious’.Footnote 4 As Burgers herself notes, I ‘welcome … the establishment of a corporate duty to mitigate climate change’.Footnote 5 At most, our disagreement concerns the content of this duty of care, or, more precisely, the method by which a judge should determine what is tortious. Surely not every contribution to ‘fuelling climate change is tortious’, as Burgers’ title seems to suggest.Footnote 6 Here, however, Burgers mischaracterizes my argument: I do not argue that ‘sectoral practices should play a more significant role in determining corporate climate mitigation obligations’,Footnote 7 or that judges should rely ‘more heavily’Footnote 8 on ascending reasoning. Rather, I simply argue that a court should rely both on ascending and descending reasoning, instead of exclusively on descending reasoning. I intentionally refrain from discussing the relative weight of these two lines of reasoning, an issue too complex to be addressed in the margins of a brief case comment.Footnote 9 As a placeholder for further analysis, I suggest that ‘a midpoint’ is be found ‘between ascending and descending reasoning’.Footnote 10 It may be, as Burgers suggests, that tort law invites more reliance on ascending reasoning than does international law.Footnote 11

My critique of the judgment is that it did not seek to find a midpoint at all. The Court did not consider any empirical evidence of the practice of oil-and-gas corporations, their clients, or society in general: as such, its reasoning is exclusively descending. Burgers contends on the contrary that ‘[t]he Court ... used descending as well as ascending reasoning’,Footnote 12 on the ground that the Court relied on (what she considers) a ‘normative consensus’Footnote 13 to determine the standard it applies to Shell. However, the application of an aspirational standard in the absence of consistent practice is the hallmark of descending, ‘utopian’ reasoning. To build on the analogy with customary international law that Burgers introduces,Footnote 14 a normative consensus would reflect opinio juris rather than state practice. The general principles on which descending reasoning relies are rarely, if ever, identified from pure abstract reason alone; generally, these principles are just the result of agreement (within society or, at least, among judges) about what ought to be done.Footnote 15 The Court follows an exclusively descending approach because it holds that Shell must comply with a global standard about what ought to be done, without considering whether this standard has ever been implemented by anyone, anywhere, at any time.

Burgers argues that Dutch tort law has a penchant for descending reasoning.Footnote 16 I am not necessarily opposed to this argument, although, in my view, it does not justify the exclusively descending reasoning that the District Court applied in Milieudefensie.Footnote 17 Yet, I am unimpressed by Burgers’ invocation of ‘the case law on the usage of asbestos’ as evidence that a descending reasoning is normally associated with the concept of propriety (i.e., ‘betamelijk’) in Article 6:162(2) BW.Footnote 18 Burgers does not cite any of these cases, but refers to a case note,Footnote 19 which directs the reader to a doctoral dissertation on the regulation of asbestos in the Netherlands.Footnote 20 This dissertation mentions a number of cases from the 1980s, in particular the ‘ground-breaking’ 1990 judgment of the Dutch Supreme Court in Janssen v. Nefabas, and suggests that they resulted in the 1993 national ban on asbestos.Footnote 21

However, these judgments do not support Burgers’ contention. For one, they rely neither on Article 6:162(2) BW (which was adopted in 1992), nor on the concept of propriety (which was not mentioned in the equivalent provision of the Civil Code before the 1992 reform).Footnote 22 Furthermore, these cases are about the safety measures to protect workers exposed to it, rather than the usage of asbestos per se; as such, they rely sometimes on more specific (and possibly more stringent) statutory provisions regarding the duty of employers to maintain workplace safety.Footnote 23 Overall, these cases do not advocate a purely descending approach. On the contrary, the Supreme Court in Janssen expressly notes the relevance of establishing ‘which safety standards were customary in enterprises like [the defendant's] own in the relevant period’.Footnote 24 This decision supports my argument that tort law should not be applied based on an exclusively descending reasoning.

Burgers' second purported disagreement regards the inconsistencies that my case comment identifies in the judgment. Burgers argues that some of these inconsistencies originate from party submissions rather than from the judge's reasoning.Footnote 25 We do not disagree on this: my case comment notes that any of these inconsistencies may originate from the party submissionsFootnote 26 and, in particular, that the substitution of a 2019 baseline for the 2010 baseline first appeared in the plaintiffs’ revised submission.Footnote 27 On the other hand, as neither Burgers nor I have access to all court submissions,Footnote 28 our account of the procedure is necessarily incomplete. For instance, neither of us can explain the plaintiffs’ bizarre change of mind concerning the baseline.

Yet, contrary to Burgers’ contention, the judge was certainly not obligated to adopt the plaintiffs’ interpretation of Shell's duty of care. Acknowledging that the conditions exist for the existence of a duty of care surely does not imply unconditional acceptance of whatever application of this duty the plaintiffs may suggest. Other courts, facing similar issues when applying various climate-related tort claims against corporations, have decided against the plaintiffsFootnote 29 – and not necessarily so because, as a matter of principle, they excluded the existence of a duty of care. Likewise, even if it had no other choice, the District Court could have concluded that the plaintiffs had not provided sufficient evidence in support of their claims or had failed to indicate an appropriate remedy.Footnote 30 This would have invited plaintiffs in subsequent cases to look for more compelling arguments.

Ultimately, my main disagreement with Burgers might relate to the complexity of the problem the Court is trying to address, namely, the mitigation of climate change. Burgers puts forward somewhat messianic claims, for instance, when asserting that the prevailing view on the least-cost global mitigation pathway falls short of what is needed to prevent dangerous climate change,Footnote 31 when proclaiming that the judgment achieves ‘necessary normative progress’,Footnote 32 and when professing that (her distorted presentation of) my analysis would lead to a ‘true dystopia’.Footnote 33

For one, Burgers systematically overlooks the costs of mitigating climate change, whether on the economy, on the environment, or ultimately on individuals. There is no point in discussing what level of mitigation action is desirable without comparing the benefits of mitigation action with its costs. If mitigation came at no cost, we certainly ought to stop all greenhouse gas emissions today.

Overall, this complexity sheds doubts on Burgers’ assertion that Milieudefensie contributes to ‘necessary normative progress’ with regard to climate change mitigation. For all the Court, Burgers, or I know, the judgment might end up hindering mitigation action, for instance, if a reduced supply of gas hinders the phasing down of coalFootnote 34 or forces energy consumers to rely on more carbon-intensive sources of oil and gas.Footnote 35 Also, the judgment may come at a disproportionate human and political cost, for instance, if, by increasing Western European countries’ dependency on Russian energy, it affects their ability to resist Russian neo-imperialism. Burgers’ apology of the case thus illustrates the potential for another dystopia: one where judges mingle clumsily into policy matters that they have neither the time nor the expertise to comprehend, with ineffective and possibly counterproductive outcomes.

15 While descending reasoning is often deductive, it relies on imperfect syllogisms that are validated by social agreement; see Tomuschat, C., ‘Obligations Arising for States without or against Their Will’ (1993) 241 Collected Courses of the Hague Academy of International Law, pp. 195–374Google Scholar, at 293. Thanks to Massimo Lando for pointing that out.

22 See Art. 1401 BW (1838 version, in force until 1992). For an English translation, see J. Limpens, R.M. Kruithof & A. Meinertzhagen-Limpens, ‘Tort or Torts’, in K. Zweigert & U. Drobnig (eds), International Encyclopedia of Comparative Law Online (Springer, 1983), vol. XI, para. 6 fn. 7: ‘Every unlawful act by which damage is caused to another obliges the person by whose fault the damage occurred to compensate for it’. By contrast, Art. 6:162(2) BW (1992 version) uses the word ‘betaamt’ as an anchor point for the doctrinal concept of betamelijk.

28 The plaintiffs have made most of their submissions publicly available, but I am not aware that Shell has done the same. Burgers cites Shell's summons to the Court of Appeal, but this does not necessarily reflect Shell's submissions before the District Court.

34 Decision 1/CMA.3, ‘Glasgow Climate Pact’, 13 Nov. 2021, UN Doc. FCCC/PA/CMA/2-21/10/Add.1, para. 36. The 2030 target of 45% emissions reduction was introduced by an IPCC projection assuming, in part, a shift from coal to gas in the 2020s, as gas energy is less carbon-intensive; see Mayer, n. 2 above, p. 414. One could question whether substituting a fossil fuel with another is the right way to mitigate climate change, but that is the assumption embedded in the studies on which the Court relied.

35 See International Energy Agency, World Energy Outlook 2018, 2018, p. 477, available at: https://iea.blob.core.windows.net/assets/77ecf96c-5f4b-4d0d-9d93-d81b938217cb/World_Energy_Outlook_2018.pdf (noting that greenhouse gas emissions from oil and gas production, transportation, and processing accounts for 15% of the total energy sector emissions and vary by a factor 4 between sources).