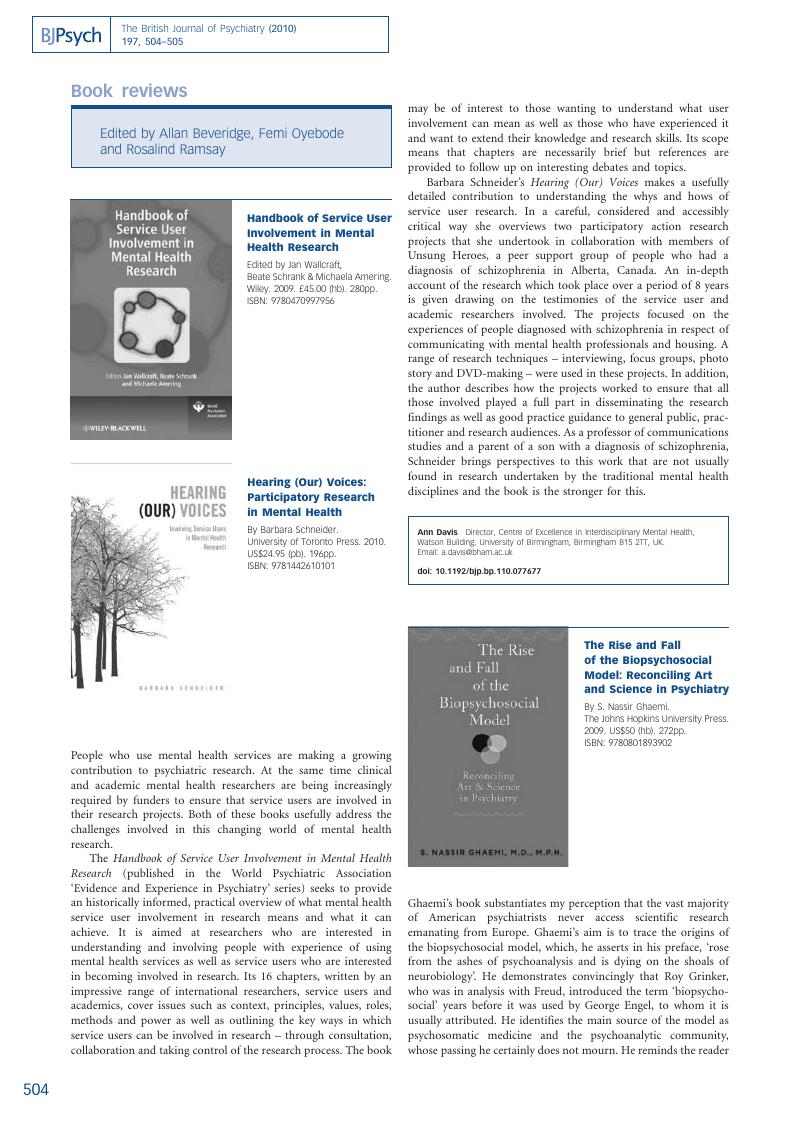 An abstract is not available for this content so a preview has been provided. To view the full text please use the links above to select your preferred format.
Type
Columns
Information
The British Journal of Psychiatry , Volume 197 , Issue 6 , December 2010 , pp. 504 - 505
DOI: https://doi.org/10.1192/bjp.bp.110.080408[Opens in a new window]
Copyright
Copyright © Royal College of Psychiatrists, 2010 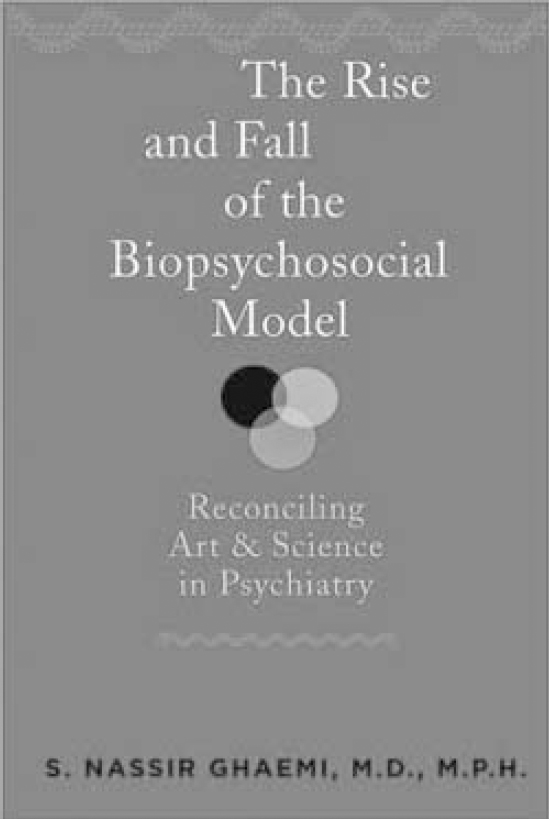 Ghaemi's book substantiates my perception that the vast majority of American psychiatrists never access scientific research emanating from Europe. Ghaemi's aim is to trace the origins of the biopsychosocial model, which, he asserts in his preface, ‘rose from the ashes of psychoanalysis and is dying on the shoals of neurobiology’. He demonstrates convincingly that Roy Grinker, who was in analysis with Freud, introduced the term ‘biopsychosocial’ years before it was used by George Engel, to whom it is usually attributed. He identifies the main source of the model as psychosomatic medicine and the psychoanalytic community, whose passing he certainly does not mourn. He reminds the reader that for decades one could not be a chairman of a department of psychiatry in the USA without being a psychoanalyst. This position of power enabled the analysts to promote the biopsychosocial model, which Ghaemi criticises for being so broad and eclectic that it could not stimulate the development of focused treatments or useful research. On the other hand, he is conscious of the limitations of a purely neurobiological approach. His solution is breathtaking: to combine the method-based epistemology of Jaspers with a thorough grounding in poetry and literature. A quote will convey the flavour of his synthesis: ‘One takes a biologically reductionist model of disease and applies it where appropriate, but always with a humanistic awareness of the person, the individual, who has the disease… This humanism is individual and existential; it is not captured by another scientific discipline (like psychology or sociology) tacked onto the discipline of biology’ (p. 209).

This last formulation exposes Ghaemi's ignorance of the development of social psychiatry in Europe, which has successfully integrated the theories and scientific methods of psychology and sociology into psychiatry. He fails to cite the work of a single European social psychiatrist, social psychologist or sociologist. Hence he is able to make statements such as the following: ‘If a person has [recurrent unipolar major depression], then the SRI should be effective, and there is little evidence that family therapy or other interventions are necessary’ (p. 110). He is unaware of the substantial body of research supporting the effectiveness of couple therapy for major depression, without the need for antidepressants. ‘Twin studies suggested that the family environment was irrelevant to the risk of developing [schizophrenia]’ (p. 135). The years of research by the Finnish group headed by Tienari have passed under Ghaemi's radar.

How has the biopsychosocial model been so successful in the UK and the rest of Europe whereas it has fallen into disrepute in the USA? Partly because psychoanalysis never dominated the academic departments of psychiatry. Also because the national health services in many European countries facilitate cooperation between social scientists and psychiatrists, to the great benefit of the patients.