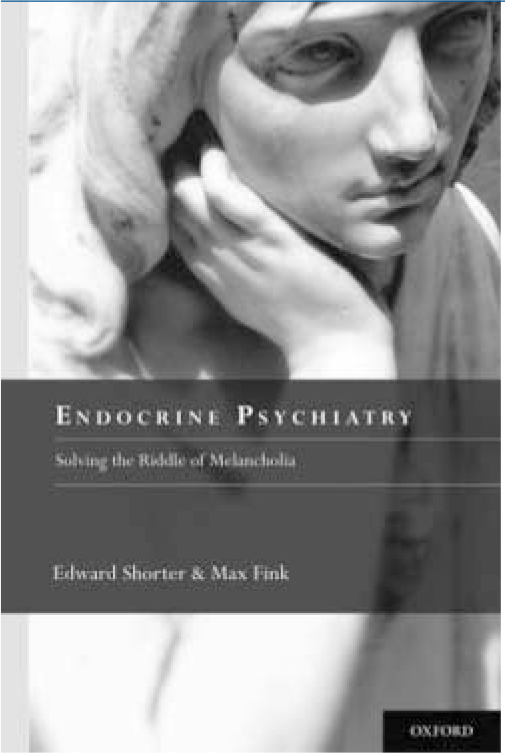 The riddle of melancholia is one which any psychiatrist should be drawn to. In this book Shorter and Fink give a fascinating history of the entrance of endocrinology into psychiatric research. They combine synthesis of the science with personal accounts and interviews to produce a readable and enjoyable tale of the subject. Not only do they describe the evolution of the scientific literature, but they give an equal focus to the personalities and the politics which shape this story.

The book sets a scene of disparate paradigms which influence an understanding of psychiatric illness but relates how some of the key medical discoveries of the 19th and 20th centuries shaped our understanding of psychiatric illness and more specifically depression. From maverick practices such as injecting ground-up testes to detailed explanations of the corticotropin-releasing factor/dexamethasone suppression tests, the reader is taken along the journey unveiling that psychological and psychiatric processes have a significant endocrine component. The central tenet of the book is a description of the rise and fall of the dexamethasone suppression test (DST). The DST is noted to predict treatment response and suicidal risk, yet because of low diagnostic specificity and being a poor measure of severity its use in clinical practice and classificatory systems has become redundant. The reader learns of the ambivalence of psychiatry towards these findings. Although dispassionate in their account, the authors lament the failure of the psychiatric establishment to embrace this measure. We read of the frustration of Bernard Carroll who developed and fought for the use of the DST.

Admittedly, the modern scientist may simply search for the largest meta-analysis to cite, but there is great value in having a historical context for the question being studied. Any systematic review will fail to discuss why diagnosis may become a checklist or how the scientific community may feel about a biomarker. Yet it is for this reason that this book holds great value which lies in understanding the history and the scientists themselves. It is a book to be enjoyed by a specialist readership but could be read by a wider audience who have an interest in medical history. With regard to endocrine psychiatry, the authors conclude, ‘it’s time to take a second look’, and indeed their book will encourage the reader to do so.