Benjamin of Tudela, the Caliph of Baghdad and the first mental hospital – Psychiatry in history 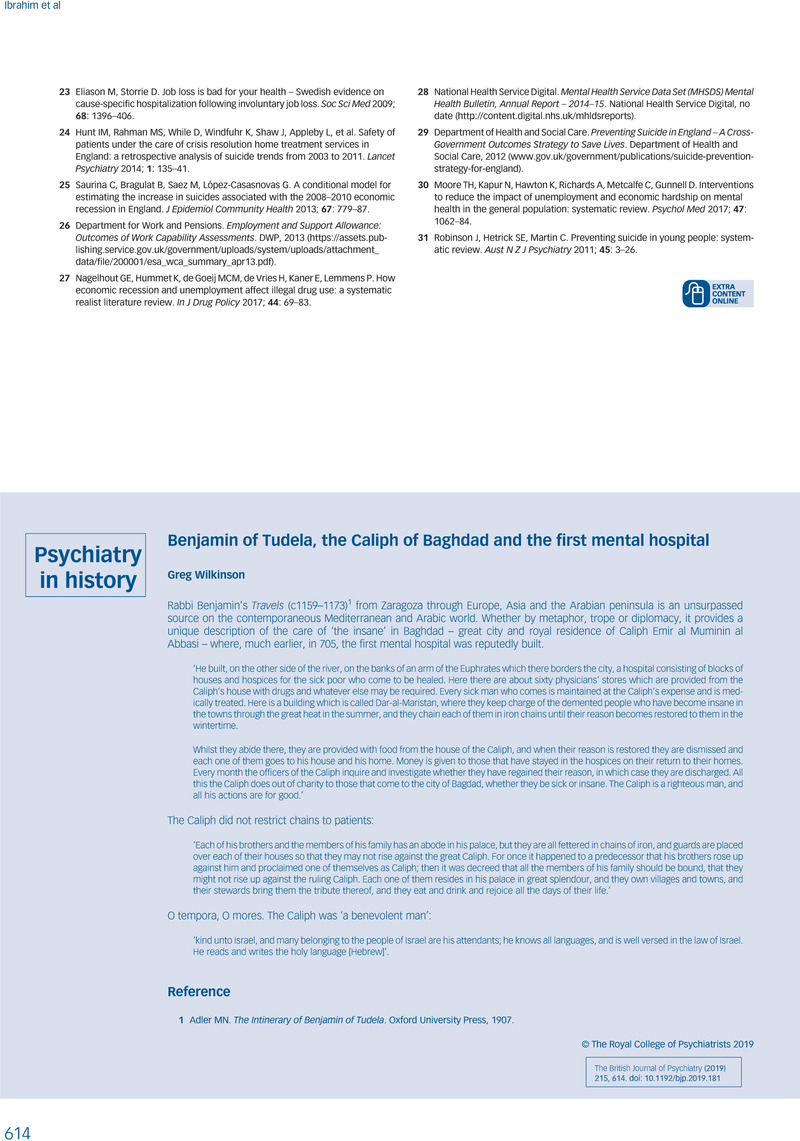 An abstract is not available for this content so a preview has been provided. To view the full text please use the links above to select your preferred format.
Type
Extras
Information
The British Journal of Psychiatry , Volume 215 , Issue 4 , October 2019 , pp. 614
DOI: https://doi.org/10.1192/bjp.2019.181[Opens in a new window]
Copyright
Copyright © The Royal College of Psychiatrists 2019

Rabbi Benjamin's Travels (c1159–1173)Reference Adler1 from Zaragoza through Europe, Asia and the Arabian peninsula is an unsurpassed source on the contemporaneous Mediterranean and Arabic world. Whether by metaphor, trope or diplomacy, it provides a unique description of the care of ‘the insane’ in Baghdad – great city and royal residence of Caliph Emir al Muminin al Abbasi – where, much earlier, in 705, the first mental hospital was reputedly built.

‘He built, on the other side of the river, on the banks of an arm of the Euphrates which there borders the city, a hospital consisting of blocks of houses and hospices for the sick poor who come to be healed. Here there are about sixty physicians' stores which are provided from the Caliph's house with drugs and whatever else may be required. Every sick man who comes is maintained at the Caliph's expense and is medically treated. Here is a building which is called Dar-al-Maristan, where they keep charge of the demented people who have become insane in the towns through the great heat in the summer, and they chain each of them in iron chains until their reason becomes restored to them in the wintertime.

Whilst they abide there, they are provided with food from the house of the Caliph, and when their reason is restored they are dismissed and each one of them goes to his house and his home. Money is given to those that have stayed in the hospices on their return to their homes. Every month the officers of the Caliph inquire and investigate whether they have regained their reason, in which case they are discharged. All this the Caliph does out of charity to those that come to the city of Bagdad, whether they be sick or insane. The Caliph is a righteous man, and all his actions are for good.’

The Caliph did not restrict chains to patients:

‘Each of his brothers and the members of his family has an abode in his palace, but they are all fettered in chains of iron, and guards are placed over each of their houses so that they may not rise against the great Caliph. For once it happened to a predecessor that his brothers rose up against him and proclaimed one of themselves as Caliph; then it was decreed that all the members of his family should be bound, that they might not rise up against the ruling Caliph. Each one of them resides in his palace in great splendour, and they own villages and towns, and their stewards bring them the tribute thereof, and they eat and drink and rejoice all the days of their life.’

O tempora, O mores. The Caliph was ‘a benevolent man’:

‘kind unto Israel, and many belonging to the people of Israel are his attendants; he knows all languages, and is well versed in the law of Israel. He reads and writes the holy language [Hebrew]’.

Benjamin of Tudela, the Caliph of Baghdad and the first mental hospital – Psychiatry in history
×

Benjamin of Tudela, the Caliph of Baghdad and the first mental hospital – Psychiatry in history
×

Benjamin of Tudela, the Caliph of Baghdad and the first mental hospital – Psychiatry in history
×
×