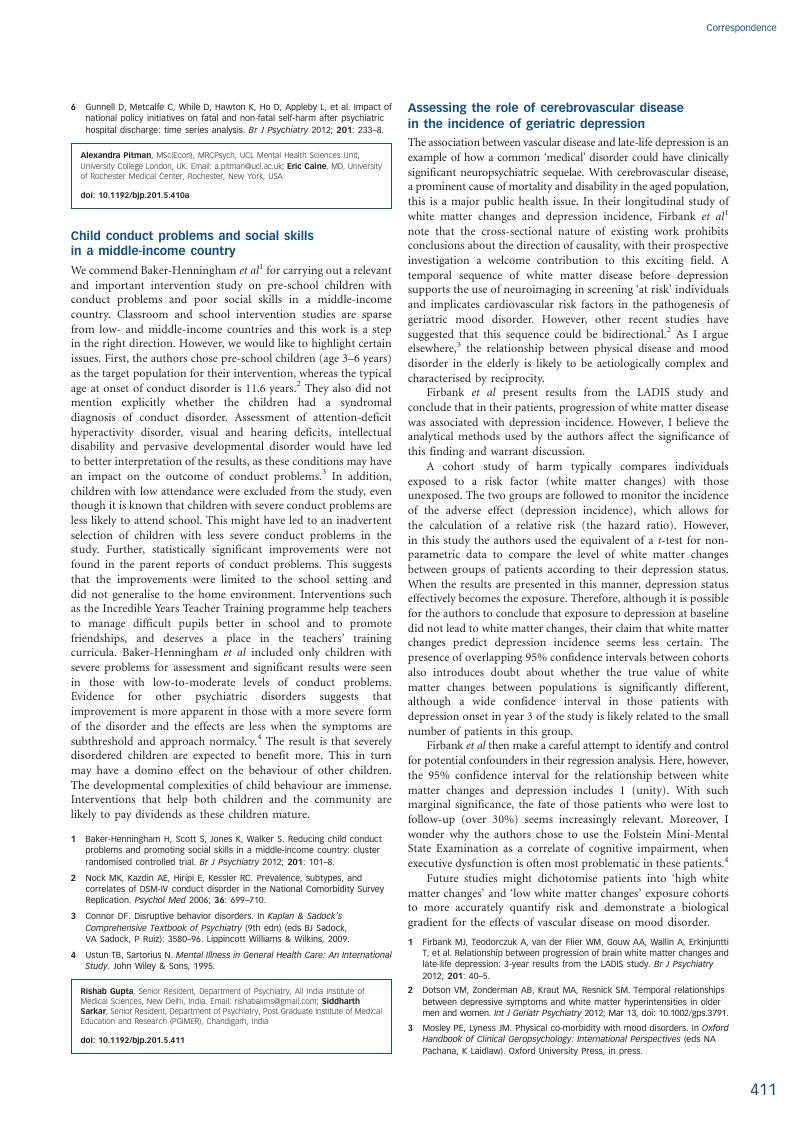 An abstract is not available for this content so a preview has been provided. To view the full text please use the links above to select your preferred format.
Type
Columns
Information
The British Journal of Psychiatry , Volume 201 , Issue 5 , November 2012 , pp. 411 - 412
DOI: https://doi.org/10.1192/bjp.201.5.411a[Opens in a new window]
Copyright
Copyright © Royal College of Psychiatrists, 2012

The association between vascular disease and late-life depression is an example of how a common ‘medical’ disorder could have clinically significant neuropsychiatric sequelae. With cerebrovascular disease, a prominent cause of mortality and disability in the aged population, this is a major public health issue. In their longitudinal study of white matter changes and depression incidence, Firbank et al Reference Firbank, Teodorczuk, van der Flier, Gouw, Wallin and Erkinjuntti1 note that the cross-sectional nature of existing work prohibits conclusions about the direction of causality, with their prospective investigation a welcome contribution to this exciting field. A temporal sequence of white matter disease before depression supports the use of neuroimaging in screening ‘at risk’ individuals and implicates cardiovascular risk factors in the pathogenesis of geriatric mood disorder. However, other recent studies have suggested that this sequence could be bidirectional. Reference Dotson, Zonderman, Kraut and Resnick2 As I argue elsewhere, Reference Mosley, Lyness, Pachana and Laidlaw3 the relationship between physical disease and mood disorder in the elderly is likely to be aetiologically complex and characterised by reciprocity.

Firbank et al present results from the LADIS study and conclude that in their patients, progression of white matter disease was associated with depression incidence. However, I believe the analytical methods used by the authors affect the significance of this finding and warrant discussion.

A cohort study of harm typically compares individuals exposed to a risk factor (white matter changes) with those unexposed. The two groups are followed to monitor the incidence of the adverse effect (depression incidence), which allows for the calculation of a relative risk (the hazard ratio). However, in this study the authors used the equivalent of a t-test for non-parametric data to compare the level of white matter changes between groups of patients according to their depression status. When the results are presented in this manner, depression status effectively becomes the exposure. Therefore, although it is possible for the authors to conclude that exposure to depression at baseline did not lead to white matter changes, their claim that white matter changes predict depression incidence seems less certain. The presence of overlapping 95% confidence intervals between cohorts also introduces doubt about whether the true value of white matter changes between populations is significantly different, although a wide confidence interval in those patients with depression onset in year 3 of the study is likely related to the small number of patients in this group.

Firbank et al then make a careful attempt to identify and control for potential confounders in their regression analysis. Here, however, the 95% confidence interval for the relationship between white matter changes and depression includes 1 (unity). With such marginal significance, the fate of those patients who were lost to follow-up (over 30%) seems increasingly relevant. Moreover, I wonder why the authors chose to use the Folstein Mini-Mental State Examination as a correlate of cognitive impairment, when executive dysfunction is often most problematic in these patients. Reference Alexopoulos, Kiosses, Heo, Murphy, Shanmugham and Gunning-Dixon4