“Once More Into the Breach, Dear Friends”: A Closer Look at Indirect Tax Receipts and the Condition of the Russian Peasantry, 1881–1899 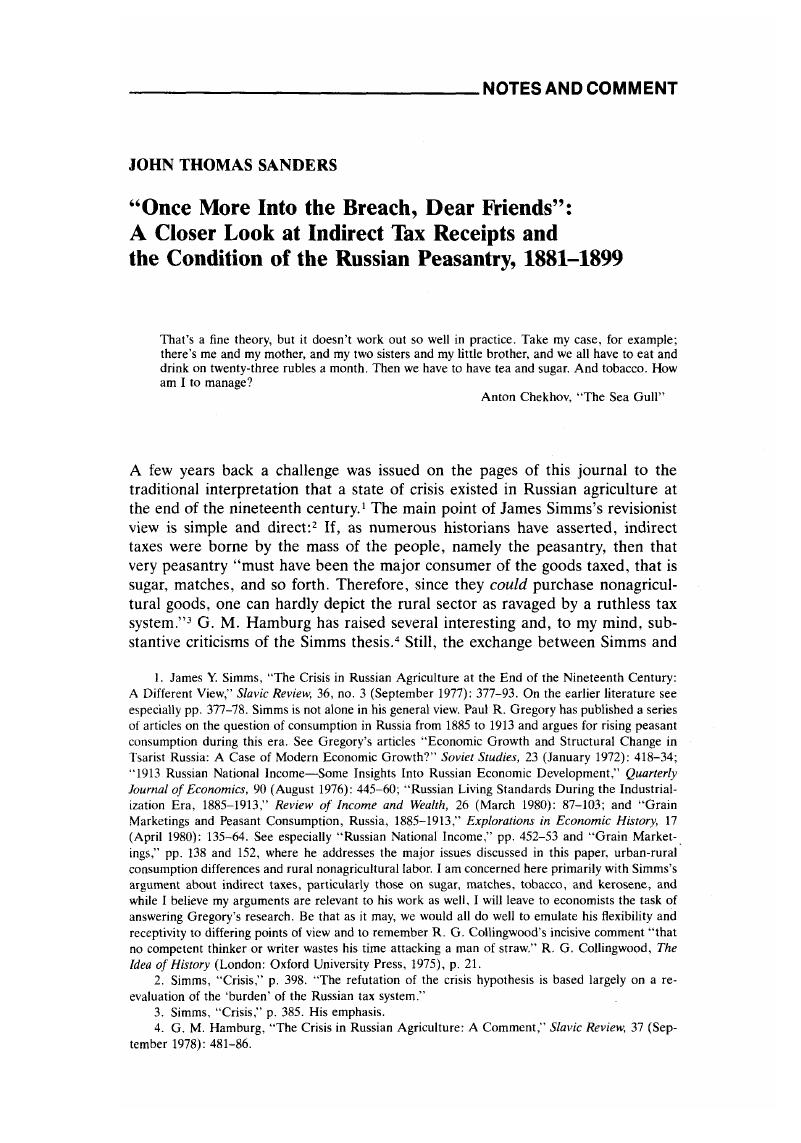 1. James Y. Simms, “The Crisis in Russian Agriculture at the End of the Nineteenth Century:A Different View,” Slavic Review, 36, no. 3 (September 1977): 377–93. On the earlier literature see especially pp. 377–78. Simms is not alone in his general view. Paul R. Gregory has published a seriesof articles on the question of consumption in Russia from 1885 to 1913 and argues for rising peasant consumption during this era. See Gregory's articles “Economic Growth and Structural Change in Tsarist Russia: A Case of Modern Economic Growth?” Soviet Studies, 23 (January 1972): 418–34; “1913 Russian National Income—Some Insights Into Russian Economic Development,” Quarterly Journal of Economics, 90 (August 1976): 445–60; “Russian Living Standards During the IndustrializationEra, 1885–1913,” Review of Income and Wealth, 26 (March 1980): 87–103; and “Grain Marketings and Peasant Consumption, Russia, 1885–1913,” Explorations in Economic History, 17(April 1980): 135–64. See especially “Russian National Income,” pp. 452–53 and “Grain Marketings, “pp. 138 and 152, where he addresses the major issues discussed in this paper, urban rural consumption differences and rural nonagricultural labor. I am concerned here primarily with Simms'sargument about indirect taxes, particularly those on sugar, matches, tobacco, and kerosene, and while I believe my arguments are relevant to his work as well, I will leave to economists the task of answering Gregory's research. Be that as it may, we would all do well to emulate his flexibility and receptivity to differing points of view and to remember R. G. Collingwood's incisive comment “that no competent thinker or writer wastes his time attacking a man of straw.” Collingwood, R. G., The Idea of History (London: Oxford University Press, 1975), p. 21 .

2. Simms, “Crisis,” p. 398. “The refutation of the crisis hypothesis is based largely on a reevaluation of the ‘burden’ of the Russian tax system. “

5. Simms, “On Missing the Point: A Rejoinder,” Slavic Review, 37 (September 1978): 487–90. For this quotation see p. 490. See also Hamburg's further thoughtful comments in “The Condition of Russian Agriculture 1861–1917: Three Controversial Issues,” Paper for the Central States Slavic Conference, Wichita, Kansas, November 1979, pp. 6–9, a central thesis of which is the need to disaggregate in order to understand the peasantry. On this and other points I find his arguments very convincing. Note as well that Eberhard Muller, using for the most part different sources, has already come to conclusions similar to those reached here. He has also challenged Simms on the question of small savings as a barometer of peasant welfare and both Simms and Gregory on the point of rising per capita grain consumption. Müller, Eberhard, “Der Beitrag der Bauern zur Industrialisierung Russlands, 1885–1930,” Jahrbücher für Ceschkhte Osteuropas, 27, no. 2 (1979): 179–219 . My sincere thanks to Mark von Hagen for helping me with the difficult prose of this article.

7. Crisp, Olga, Studies in the Russian Economy before 1914 (London: MacMillan Press, 1976),p. 99 ; and Entsiklopedicheskii slovar’ Brokgauz Efron, vol. 29, s. v. “Sakhar” (St. Petersburg, 1900),pp. 17, 25, and vol. 32 s. v. “Tabak” (St. Petersburg, 1901), pp. 430–31. Not only was the sale of tobacco products by all but licensed stores prohibited and the system of enforcement tightened up, but the sugar taxation system was also placed on a whole new footing. Prior to 1881 the tax was levied on the estimated yield of sugar from a given quantity of unprocessed sugar beets. Phenomenal increases in productivity in the sugar industry destroyed the basis for these estimates, and revenue from the sugar tax actually declined from 6.775 million rubles in 1877 to 3.591 million in 1881. In 1881 the system was altered and the tax placed directly on processed sugar.Another side of increased returns from indirect taxes was higher tax rates. Simms's statement (“Crisis,” p. 386) that indirect taxes rose 108 percent in the period from 1881 to 1901 is incorrect.The sugar tax rose 350 percent. The tax rate for a pud of sugar was 50 kopecks from August 1, 1881to August 1, 1883, when it was raised to 65 kopecks per pud. On August 1, 1886 it was hiked once more to 85 kopecks, where it remained till August 1, 1889, when the rate went to 1 ruble per pud.This remained in effect until September 1, 1894, although a supplemental tax of 40 kopecks per pudwas tacked on to refined sugar on September 1, 1892, only to be removed when the rate for all sugar went to 1.75 rubles in 1894. See Ministerstvo Finansov, 1802–1902, vol. 2 (St. Petersburg, 1902),pp. 180–84. The tobacco tax was raised in 1882 and again in 1887. See Brokgauz-Efron, “Tabak. “pp. 430–31, and Polnoe sobranie zakonov rossiskoi imperii, 3rd series, vol. 7, 1887 (St. Petersburg,1889), article 4,488, pp. 251–52. In addition, partial, supplemental taxes were added in 1893 and1900, for which see Ministerstvo Finansov, vol. 2, pp. 178 and 499. The increase could not have been less than 50 percent. Inasmuch as neither the kerosene tax nor the match tax existed in 1881, it is meaningless to speak of percentage increases. Nonetheless, each was raised four years after their introduction in 1888. The kerosene tax differed for light and heavy oil, and the former was raised 50 percent in 1892, the latter 67 percent. That same year, in an attempt to discourage the use of dangerous phosphorous matches, the government doubled the tax on them. However these figures are analyzed—and it is impossible to point to any specific number as the percentage rate of increase in indirect taxation—the increase clearly exceeded 108 percent. For the data on the kerosene and match taxes see Ministerstvo Finansov, vol. 2, pp. 185–86, and Shvanebakh, Nashe podatnoe delo.p. 101.

10. Simms, “Crisis,” p. 385 considers this possibility briefly before rejecting it as unlikely.

15. Shvanebakh, Nashe podatnoe delo, p. 100. Shvanebakh made an error in his calculations and came up with 2.94 pounds as the urban per capita consumption, and 1.04 as the rural per capita allotment. Those figures do not correspond with the other figures he has listed, so 1 have made the correction. In any event, the ratio of urban to rural is 2.8, whether Shvanebakh's figures or my own calculations are used.

15. Shvanebakh, Nashe podatnoe delo, p. 100. Shvanebakh made an error in his calculations and came up with 2.94 pounds as the urban per capita consumption, and 1.04 as the rural per capita allotment. Those figures do not correspond with the other figures he has listed, so 1 have made the correction. In any event, the ratio of urban to rural is 2.8, whether Shvanebakh's figures or my own calculations are used.

18. Ibid., p. 604. Lest these be taken as isolated instances, see ibid., p. 556, where he states that “indications of rural impoverishment and of the connection of this impoverishment to the inability of the population to bear the tax burden are encountered in a vast number of the committees.They come both from black earth and industrial regions, from the Volga region and from the steppe zones, from the periphery and from the center.” In n. 1, p. 556 he indicates that declarations to this effect from a number of uezd committees are found in the reports from twenty-nine guberniias of European Russia, which he lists.

26. The logic behind the use of this indicator was that Russia's industrial activity reflected the ups and downs of international trade and the world economy. Thus, figures for exports from England,a leading economic power and the major entrepôt for world trade, would serve as a rough indicator of Russian industrial activity.

28. Simms tends to blur the distinction between crisis in agriculture and peasant crisis, perhaps because the historiography against which he is arguing does the same in places. Hamburg faults him on this point (Hamburg, “Comment,” p. 483 and pp. 484–85 and again in “Three Issues,” p. 7),but in his reply to Hamburg's “Comment” Simms maintains that he is “concerned with aggregate peasant welfare.” Simms, “Missing the Point,” p. 489. And, indeed, on p. 378 of his original article Simms claims that scholars interpret the crisis as applying to the rural economy in general. Earlier scholarship notwithstanding, it seems reasonably important that we begin to divide the peasantry into analytically meaningful groups. After all, the bulk of the urban proletariat was officially “peasant “by soslovie.

32. Robert A. Lewis and Richard Rowland, “Urbanization in Russia and the USSR: 1897–1966,” Annals of the Association of American Geographers, 59 (December 1969): 778. Cited in Fedor, Thomas Stanley, Patterns of Urban Growth in the Russian Empire During the Nineteenth Century (Chicago: Department of Geography, University of Chicago, 1975), Research Paper #163,p. 17.

40. Simms writes in “Crisis,” p. 386, “In 1930, George Pavlovsky, author of Agricultural Russia on the Eve of the Revolution, stated quite emphatically that the redemption payments are not a heavy burden on the peasants after the reduction made in the size of those payments in 1881.” It seems tome that, as he did with Lenin, Simms has seized on one part of Pavlovsky's statement and ignored the rest, and in so doing misread the author's meaning. This is the full quotation to which Simms refers, even though he incorrectly attributes it to p. 78. Pavlovsky, George, Agricultural Russia on the Eve of the Revolution (London: George Routledge and Sons, 1930), p. 79 .

44. As late as the 1890s the Ministry of Finance took a negative stance concerning the formation of a Ministry of Agriculture, and in 1895 only two agricultural colleges existed with a grand total of seventy–five students. On the Ministry of Agriculture see Crisp, Studies in the Russian Economy, p. 104; for the agricultural schools see Kerblay, Basile, “A. V. Chayanov, Life, Career, Works.” in Chayanov, Aleksandr, The Theory of Peasant Economy, ed. by Thorner, Daniel, Kerblay, Basile and Smith, Robert E. F. (Homewood, Illinois: Richard D. Irwin, 1966), p. xxviii, n. 10.

“Once More Into the Breach, Dear Friends”: A Closer Look at Indirect Tax Receipts and the Condition of the Russian Peasantry, 1881–1899