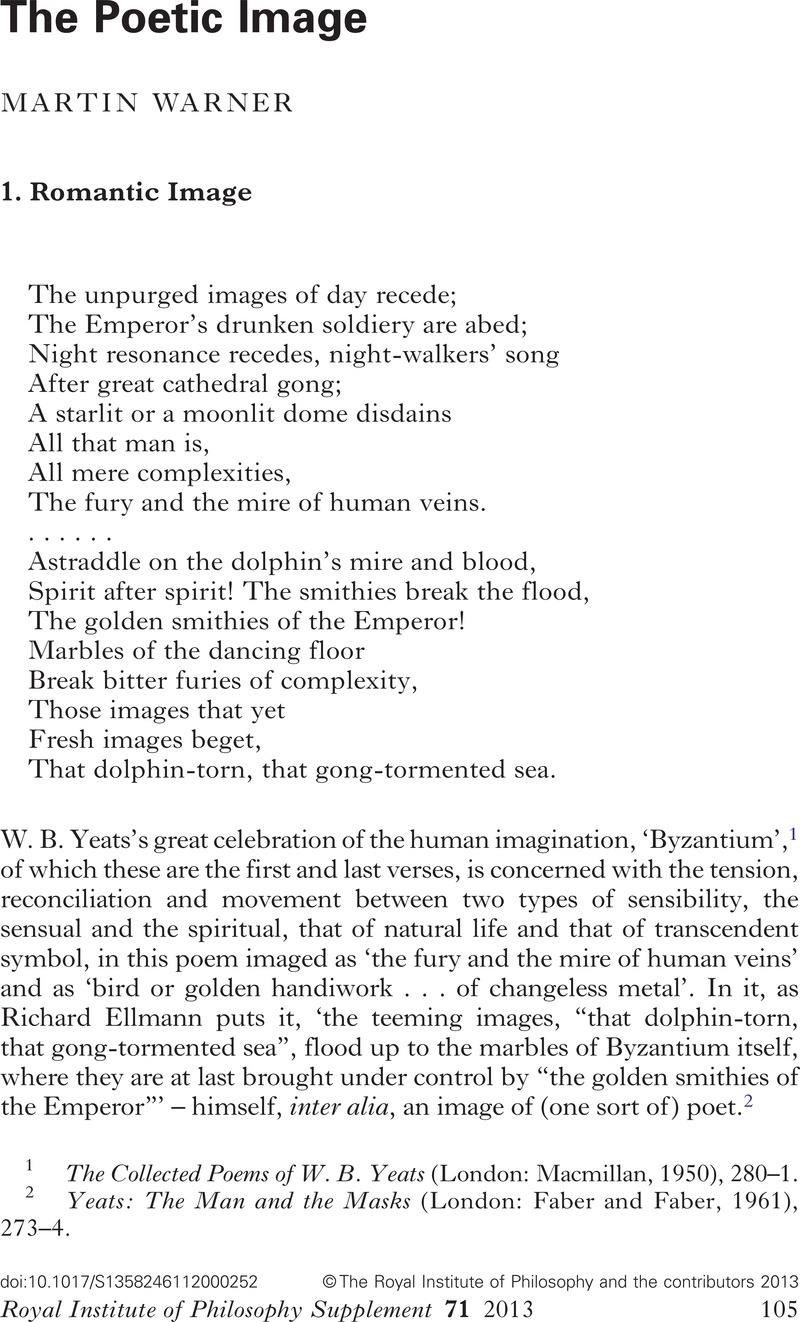 COPYRIGHT: © The Royal Institute of Philosophy and the contributors 2013

3 F. A. C. Wilson, drawing on Yeats's ‘heterodox mysticism’, takes the Emperor to symbolize God and interprets the passage from natural life to transcendent symbol as that from this life to the next. (W. B. Yeats and Tradition, London: Victor Gollancz, 1958; 231–243, esp. 242; also 15). On my account this ‘mystical’ dimension of the poem images a form of human creativity. ‘Byzantium’ contains both aspects; it is the nature of the Romantic Image to be multifaceted in such ways.

9 The Symbolist Movement in Literature, op.cit, 129.

11 The Collected Poems of William Carlos Williams, Volume I 1909–1939, ed. Litz, A. Walton and MacGowan, Christopher (Manchester: Carcanet, 1987), 224. For convenience, I on occasion refer to this poem using its conventional designation, as above, but strictly it is untitled.

12 See especially ‘Logic and Conversation’ in his Studies in the Way of Words (Cambridge, Mass. and London: Harvard University Press, 1989) 22–40.

19 ‘Imagination and Perception’, in his Freedom and Resentment and Other Essays (London and New York: Routledge, 2008), 50.

33 The Poetic Image, op. cit., 23; the quotation is from John Middleton Murry's essay ‘Metaphor’ in his Countries of the Mind: Essays in Literary Criticism (London: Oxford University Press, 1937), II. 4.

34 Ibid, 25. Compare O'Hear, Anthony, The Element of Fire: Science, Art and the Human World (London and New York: Routledge, 1988), 104–5: ‘A literal description of a feeling or attitude I have will not precisely delineate it, nor will it bring out the way in which it is not an object for me, but something I feel, something constitutive of what I am. It is at this point that one can have recourse to metaphor or symbol, transferring certain terms from the public realm to indicate the nature of one's inner state. . . . [T]he metaphor, precisely because it is not literal, awakens intimations and a free flow of associations, where the literal closes and confines one's thought. . . . [T]he criterion of success will be to produce a metaphor which evokes the right sort of experience in one's audience.’

35 The Poetic Image, op. cit., 25, 35. If, as some suppose, Nashe's “air” is an error for “hair” this does not weaken the point; the received line has stood the test of time in a manner the proposed alternative could hardly have done.

39 The Statesman's Manual: or The Bible the Best Guide to Political Skill and Foresight, in his Lay Sermons. Ed. White, R. J., Collected Works, Vol.6, Bollingen Series LXXV (Cambridge and Princeton: Routledge & Kegan Paul and Princeton UP, 1972), 30. Compare: ‘The allegorist leaves the given . . . to talk of that which is confessedly less real, which is a fiction. The symbolist leaves the given to find that which is more real.’ Lewis, C. S., The Allegory of Love: A Study in Medieval Tradition (New York: Oxford University Press, 1958), 45.

41 The Figure of Beatrice: A Study in Dante (London: Faber and Faber, 1943), 7. Williams's use of “image” appears to have significant affinities with that later proposed by Novitz.

47 ‘Imagery and Movement: Notes in the Analysis of Poetry (ii)’, in his A Selection From Scrutiny, Vol. 1 (Cambridge: Cambridge University Press, 1968), 231. He adds that in considering certain types of poetic effect ‘we find “imagery” giving place to “movement” as the appropriate term for calling attention to what has to be analysed’. (237)

48 From Tennyson's ‘Break, break, break’; compare Eliot's ‘The dancers are all gone under the hill' (‘East Coker’ II).

55 See, for example, Raine, Kathleen, ‘On the Symbol’, in her Defending Ancient Springs (London: Oxford University Press, 1967), 105–22, and ‘The Vertical Dimension’, Temenos 13, 1992, 195–212. Also Bodkin, Maud, Archetypal Patterns in Poetry: Psychological Studies of Imagination (London: Oxford University Press, 1934). Symons advocated ‘that confidence in the eternal correspondences between the visible and the invisible universe, which Mallarmé taught’ (The Symbolist Movement in Literature, op.cit, 138).

57 ‘The Rhetoric of Temporality’, in his Blindness and Insight: Essays in the Rhetoric of Contemporary Criticism, 2nd edn, (Minneapolis: University of Minnesota Press, 1983), §I. ‘Allegory and Symbol’, 208.

58 A vigorous response to de Man's essay has been mounted by Douglas Hedley (Living Forms of the Imagination, op. cit., 136–40). For de Man ‘the prevalence of allegory always corresponds to the unveiling of an authentically temporal destiny’, where ‘self’ and ‘non-self’ can never ‘coincide’ (‘The Rhetoric of Temporality’, 206–7), and he downplays the contrast between allegory and symbol as being of ‘secondary importance’, arguing that Coleridge implicitly allows figural language as such to be understood in terms of ‘translucence’ (192–3). Hedley replies, with some plausibility, that this in effect collapses a crucial distinction, pointing out that for Coleridge there is an ‘ontological link between symbols and the reality symbolized [which] becomes transparent in the image’, but that with allegory there is ‘a different relationship between the means of expression and the objects of that expression’ (Living Forms, 138–9). De Man's rejection of any such ontological link, and hence resistance to claims for a symbolic, synecdochal, ‘translucence’ of the eternal through and in the temporal, appears to be in part a consequence of his accepting the self's ‘authentically temporal destiny’ as being crucial to the ‘truths’ supposed to have ‘come to light in the last quarter of the eighteenth century’, and coming close to implying that the associated ‘secularized thought . . . no longer allows a transcendence of the antinomies between the created world and the act of creation’ (‘The Rhetoric of Temporality’, 206–7). Such a position is, of course, incompatible with Coleridgean panentheism. De Man's assault on ‘this symbolical style’ as lacking ‘an entirely good poetic conscience’ (208) looks suspiciously like a form of petitio in the guise of analysis.

69 My thanks to my brother, the poet Francis Warner, for comments and reminders.