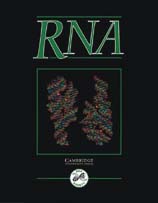 We are using the rat β-tropomyosin (β-TM) gene as a model system to study the mechanism of alternative splicing. Previous studies demonstrated that the use of the muscle-specific exon is associated with the use of distant branch points located 147–153 nt upstream of the 3′ splice site. In addition, at least one protein, the polypyrimidine tract binding protein (PTB), specifically interacts with critical cis-acting sequences upstream of exon 7 that are involved in blocking the use of this alternative exon in nonmuscle cells. In order to further study the role of PTB, monoclonal antibodies to PTB were prepared. Anti-PTB antibodies did not inhibit the binding of PTB to RNA because they were able to supershift RNA–PTB complexes. To determine if additional proteins interact with sequences within the pre-mRNA, 35S-met-labeled nuclear extracts from HeLa cells were mixed with RNAs and the RNA–protein complexes were recovered by immunoprecipitation using antibodies to PTB. When RNAs containing intron 6 were added to an 35S-met-labeled nuclear extract, precipitation with PTB antibodies showed a novel set of proteins. By contrast, addition of RNAs containing introns 5 or 7 gave the same results as no RNA, indicating that these RNAs are unable to form stable complexes with PTB. These results are in agreement with our previous studies demonstrating that PTB interacts with sequences within intron 6, but not with sequences within introns 5 and 7. When 35S-met-labeled HeLa nuclear extracts were mixed with biotinylated RNA containing intron 6 and the RNA–protein complexes were recovered using streptavidin-agarose beads, an identical pattern of proteins was observed when compared with the immunoprecipitation assay. Analysis of the proteins that assembled on introns 5, 6, or 7 using biotinylated RNA revealed a unique set of proteins that interact with each of these sequences. The composition of proteins interacting with sequences associated with the use of the 3′ splice site of intron 6 included proteins of 30, 40, 55, 60, 65, 70, 80, and 100 kDa. Microsequencing identified two of the proteins to be Sam68 and the Far Upstream Element Binding Protein (FBP) from the c-myc gene. In addition, a comparison of the proteins that assemble on introns from the α- and β-TM genes that utilize distant branch points revealed common as well as unique proteins that assemble on these introns. These studies identify a set of proteins, in addition to PTB, that are likely involved in the use of distant branch sites associated with the use of alternatively spliced introns.