Shakespeare's Politics in Honor of the 400th Anniversary of his Birth 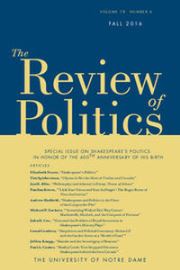