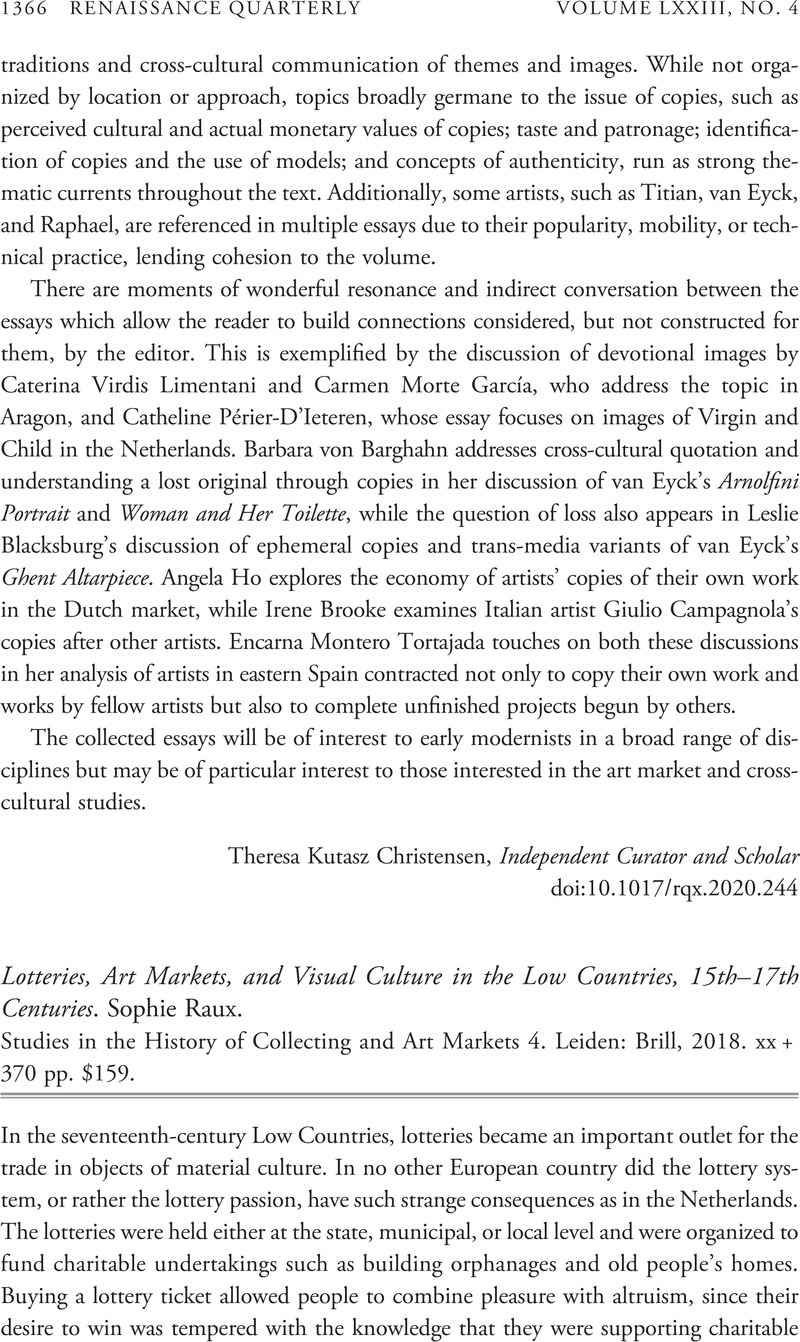 Copyright
Copyright © The Author(s) 2021. Published by the Renaissance Society of America

In the seventeenth-century Low Countries, lotteries became an important outlet for the trade in objects of material culture. In no other European country did the lottery system, or rather the lottery passion, have such strange consequences as in the Netherlands. The lotteries were held either at the state, municipal, or local level and were organized to fund charitable undertakings such as building orphanages and old people's homes. Buying a lottery ticket allowed people to combine pleasure with altruism, since their desire to win was tempered with the knowledge that they were supporting charitable causes. The large prizes that were offered, whether porcelain, mirrors, paintings, or cash, unleashed a real lottery mania, which can be compared to the speculation that took place in tulip bulbs. Entrepreneurs who organized itinerant lotteries in the Southern Netherlands and in the Dutch Republic fostered this passion. Among them we find traders, but also artisans and painters such as Dirk Hals, Frans Pietersz de Grebber, and Jan Miense Molenaer.

People bought a lot of tickets in order to increase their chances of winning and paid not only in cash but also in valuables. In this way the lottery system gradually became independent and turned into a profitable business for those running it. Painters and art dealers also used this lucrative opportunity to display their work and stocks of pictures profitably before the general public. That is why lotteries have found attention by historians, art historians, and economists studying the Dutch art market.

Despite various smaller studies, Sophie Raux's book provides the first fundamental monograph that examines the history of lotteries and the art markets in the Southern Netherlands and the Dutch Republic. She shows that the lotteries emerged in the context of the expanding art market in the Dutch Golden Age. Painters produced paintings for an anonymous market and wanted to sell their works to the public, experimenting with new market strategies and new distribution channels. To make the public aware of the new offer, entrepreneurs had to publicize the lotteries, using the new print media to produce lottery posters and booklets.

It is to the merit of Sophie Raux to have for the first time thoroughly explored the role of print in structuring the art world. She shows that for the dealers who organized successful lotteries, posters and booklets were crucial promotional tools and to an extent predecessors of the later art auction catalogue. Thus, these media had an impact on the new material and commercial culture of the Dutch Republic. In the eighteenth century the character of the lottery changed all over Europe. They became a financial tool at the service of the states, while charity and private lotteries lost significance and especially the visibility they had had in the late sixteenth and seventeenth centuries.

This well-written and lavishly illustrated book is a must read for art historians and historians working on the early modern Low Countries.