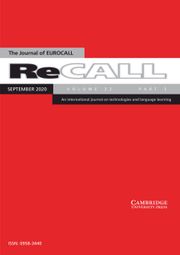 Computer-assisted language learning (CALL) has reached a stage of maturity where it is no longer necessary to try to prove that it is “better” than traditional teaching. We begin this issue with two papers that take alternative approaches. In the first, Marta Tecedor and Gonzalo Campos-Dintrans focus on the types of benefits CALL can bring in different forms and contexts. Their study compares face-to-face teaching with online voice recording and peer-to-peer videoconferencing, finding that each has something to contribute in terms of complexity, accuracy and fluency, with varying outcomes on different task types. The next paper looks not at different types of CALL, but at varying effects among different types of learners. Building on a previous study into learning outcomes based on glossary information, Hansol Lee, Mark Warschauer and Jang Ho Lee here subject their data set to a model-based clustering technique. The results suggest that the approach used – data-driven learning – may be more successful with some learners than with others, with proficiency a further factor, though the picture is potentially extremely rich and complex.

Since the abandon of behaviourist drills in language laboratories, pronunciation has received less attention in CALL than some other language features, skills and competences. However, a carefully designed study by Jonás Fouz-González shows that podcasts, in the present case, can usefully help with both perception and production of problem phonemes for particular language backgrounds. Vocabulary has received a boost in our field since the introduction of mobile-assisted language learning (MALL), where the lexical level lends itself to small portable devices. Chih-Ming Chen, Huimei Liu and Hong-Bin Huang describe an app with multiple games that was not only popular with students, but also led to substantial gains in both post- and delayed tests compared to a control.

Although teachers tend to view marking and correcting as an intrinsic part of their job, many approach such activities with little enthusiasm, hence the attraction of automatic feedback systems. Aysel Saricaoglu examines specific formative effects of one such system in academic writing, concluding that it can indeed lead to changes in learners’ practices, albeit with a number of caveats. While CALL might seem like a useful luxury in some parts of the world, in other contexts it represents a major means of access to language education. In the final paper of the issue, Yvette Slaughter, Wally Smith and John Hajek describe networks among clusters of schools in the Australian outback to identify divergent practices in the use of videoconferencing and other types of language provision, and variables affecting their usefulness.