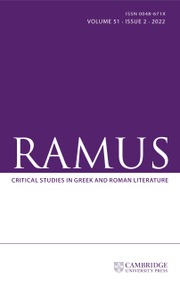 The Death of Love in Nonnus' Dionysiaca: The Rapes of Nicaea and Aura

The rapes of Nicaea and Aura, in Books 15-16 and 48 respectively of the Dionysiaca, are two of the most disturbing episodes in Nonnus' epic. The first figures a young huntress who does not hesitate to murder her persistent admirer; the second has another huntress—ex-protegée of Artemis—killing and eating her own offspring. As will become obvious in this section, these two stories have attracted a fair amount of attention from scholars of the Dionysiaca. Most interpretative approaches have, however, tended to look for exclusively ‘classical’ models and influences. While there is no doubt that the Dionysiaca is an immensely learned poem, borrowing from and playing with a great variety of ancient texts, its content cannot be explained with reference to classical intertexts only. My paper asks how these stories would relate to contemporaneous concerns and cultural trends. It will suggest that the rejection of marriage and childbearing, which is evident in these episodes, is informed by Christian ideas on sexuality, and has to be viewed as part of the extensive ‘repackaging’ of classical antiquity to suit new agendas, which is a feature of much contemporary literature.

The Death of Love in Nonnus' Dionysiaca: The Rapes of Nicaea and Aura
×

The Death of Love in Nonnus' Dionysiaca: The Rapes of Nicaea and Aura
×

The Death of Love in Nonnus' Dionysiaca: The Rapes of Nicaea and Aura
×
×