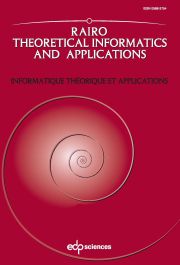 On the size of transducers for bidirectional decoding of prefix codes

In a previous paper [L. Giambruno and S. Mantaci, Theoret. Comput. Sci. 411 (2010) 1785–1792] a bideterministic transducer is defined for the bidirectional deciphering of words by the method introduced by Girod [IEEE Commun. Lett. 3 (1999) 245–247]. Such a method is defined using prefix codes. Moreover a coding method, inspired by the Girod’s one, is introduced, and a transducer that allows both right-to-left and left-to-right decoding by this method is defined. It is proved also that this transducer is minimal. Here we consider the number of states of such a transducer, related to some features of the considered prefix code X. We find some bounds of such a number of states in relation with different notions of “size” of X. In particular, we give an exact formula for the number of states of transducers associated to maximal prefix codes. We moreover consider two special cases of codes: maximal uniform codes and a class of codes, that we name string-codes. We show that they represent, for maximal codes, the extreme cases with regard to the number of states in terms of different sizes. Moreover we prove that prefix codes corresponding to isomorphic trees have transducers that are isomorphic as unlabeled graphs.

On the size of transducers for bidirectional decoding of prefix codes
×

On the size of transducers for bidirectional decoding of prefix codes
×

On the size of transducers for bidirectional decoding of prefix codes
×
×