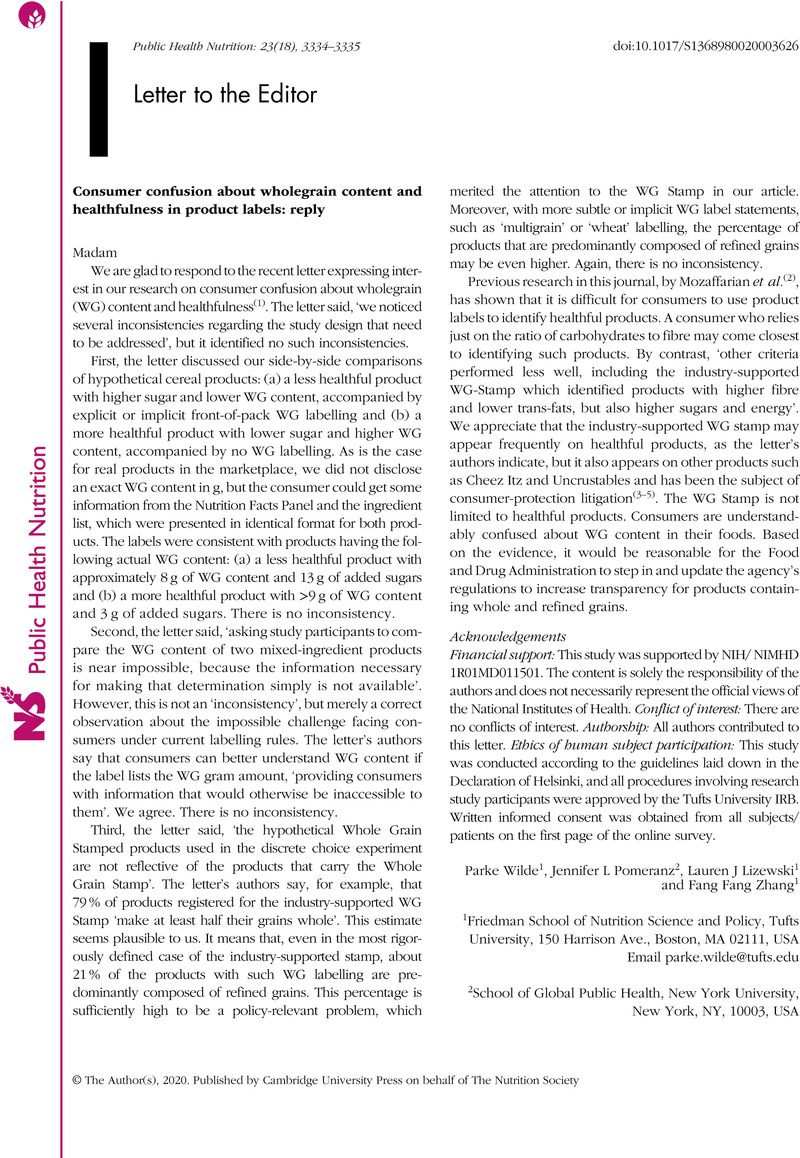 Copyright
© The Author(s), 2020. Published by Cambridge University Press on behalf of The Nutrition Society

We are glad to respond to the recent letter expressing interest in our research on consumer confusion about wholegrain (WG) content and healthfulness(Reference Wilde, Pomeranz and Lizewski1). The letter said, ‘we noticed several inconsistencies regarding the study design that need to be addressed’, but it identified no such inconsistencies.

Second, the letter said, ‘asking study participants to compare the WG content of two mixed-ingredient products is near impossible, because the information necessary for making that determination simply is not available’. However, this is not an ‘inconsistency’, but merely a correct observation about the impossible challenge facing consumers under current labelling rules. The letter’s authors say that consumers can better understand WG content if the label lists the WG gram amount, ‘providing consumers with information that would otherwise be inaccessible to them’. We agree. There is no inconsistency.

Third, the letter said, ‘the hypothetical Whole Grain Stamped products used in the discrete choice experiment are not reflective of the products that carry the Whole Grain Stamp’. The letter’s authors say, for example, that 79 % of products registered for the industry-supported WG Stamp ‘make at least half their grains whole’. This estimate seems plausible to us. It means that, even in the most rigorously defined case of the industry-supported stamp, about 21 % of the products with such WG labelling are predominantly composed of refined grains. This percentage is sufficiently high to be a policy-relevant problem, which merited the attention to the WG Stamp in our article. Moreover, with more subtle or implicit WG label statements, such as ‘multigrain’ or ‘wheat’ labelling, the percentage of products that are predominantly composed of refined grains may be even higher. Again, there is no inconsistency.

Previous research in this journal, by Mozaffarian et al. (Reference Mozaffarian, Lee and Kennedy2), has shown that it is difficult for consumers to use product labels to identify healthful products. A consumer who relies just on the ratio of carbohydrates to fibre may come closest to identifying such products. By contrast, ‘other criteria performed less well, including the industry-supported WG-Stamp which identified products with higher fibre and lower trans-fats, but also higher sugars and energy’. We appreciate that the industry-supported WG stamp may appear frequently on healthful products, as the letter’s authors indicate, but it also appears on other products such as Cheez Itz and Uncrustables and has been the subject of consumer-protection litigation(Reference Watson3–5). The WG Stamp is not limited to healthful products. Consumers are understandably confused about WG content in their foods. Based on the evidence, it would be reasonable for the Food and Drug Administration to step in and update the agency’s regulations to increase transparency for products containing whole and refined grains.

Financial support: This study was supported by NIH/ NIMHD 1R01MD011501. The content is solely the responsibility of the authors and does not necessarily represent the official views of the National Institutes of Health. Conflict of interest: There are no conflicts of interest. Authorship: All authors contributed to this letter. Ethics of human subject participation: This study was conducted according to the guidelines laid down in the Declaration of Helsinki, and all procedures involving research study participants were approved by the Tufts University IRB. Written informed consent was obtained from all subjects/patients on the first page of the online survey.