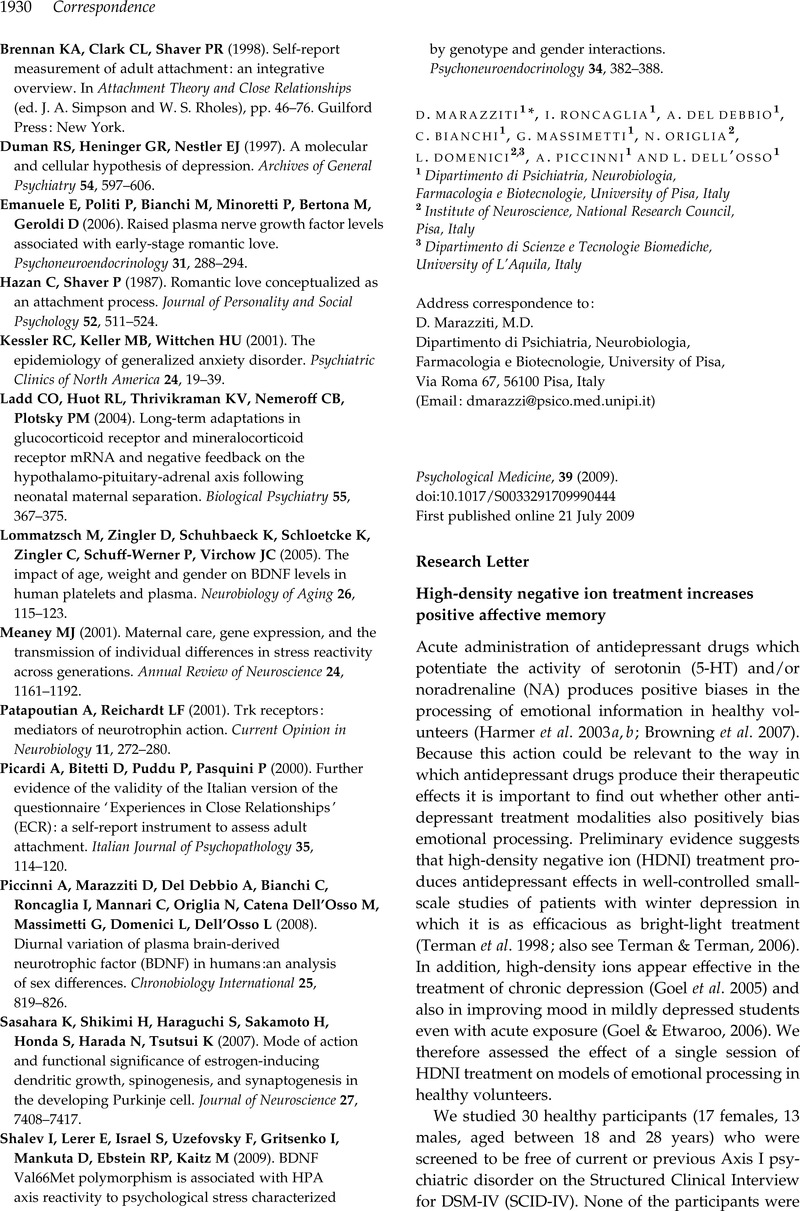 We studied 30 healthy participants (17 females, 13 males, aged between 18 and 28 years) who were screened to be free of current or previous Axis I psychiatric disorder on the Structured Clinical Interview for DSM-IV (SCID-IV). None of the participants were currently taking medications or had previous experience of negative air ionization treatments. Participants were randomly assigned to a HDNI or control condition in a single-blind parallel-group design. HDNI treatment was delivered by a SphereOne FreshAIR Negative Ionizer (SphereOne Inc., USA) with wrist strap, shown to be effective in previous studies of winter depression. The device was deactivated for the control condition but this was not visible to participants. Participants received 30-min HDNI exposure and then began the emotional test battery described below. During this period, which lasted for about a further 60 min, the HDNI treatment was continued.

Subjective state before and at the end of the 30-min HDNI treatment period was measured by six visual analogue scales (VAS) designed to capture the following emotions: happiness, sadness, hostility, alertness, anxiety and calmness. Participants were also asked to guess which condition they thought they had received. The emotional test battery employed has been previously described (Harmer et al. Reference Harmer, Bhagwagar, Perrett, Vollm, Cowen and Goodwin2003a, Reference Harmer, Hill, Taylor, Cowen and Goodwinb; Browning et al. Reference Browning, Reid, Cowen, Goodwin and Harmer2007) and consisted of an emotional categorization task with surprise emotional recall and recognition, a facial expression recognition test, and a dot-probe task of attention with masked and unmasked conditions.

The two treatment groups did not differ significantly on any the following baseline variables: age, gender, Beck Depression Inventory (BDI; Beck et al. Reference Beck, Ward, Mendelson, Mock and Erbaugh1961), trait scores on the Eysenck Personality Questionnaire (Eysenck & Eysenck, Reference Eysenck and Eysenck1991), and verbal IQ measured by the National Adult Reading Test (NART; Nelson, Reference Nelson1982; data not shown). The majority of participants in both groups (77% overall) guessed that they were in the control condition and there were no effects of HDNI treatment on any of the VAS ratings (all p values >0.1). To examine mood response as a function of initial mood, correlations between BDI score at baseline (range 0–15) and mood response were computed for the six measures of subjective state in the group receiving HDNI treatment. This revealed a positive correlation between BDI score and increased calmness following the HDNI treatment (r=0.5, p<0.05), but not after sham treatment (r=−0.1, p=0.7), suggesting there may be some very subtle effects in those with low mood at the start of the study. None of the other correlations were statistically significant (all p values >0.08). 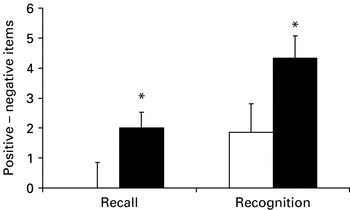 Our findings indicate that HDNI treatment produces a positive bias in emotional recall and recognition. Participants were unable to reliably guess the condition that they were in, suggesting that the procedure was effective in limiting subject-expectancy bias in the results. These findings are similar to those we have obtained in healthy volunteers with the use of antidepressant medications such as citalopram (Harmer et al. 2003 a), reboxetine (Harmer et al. 2003 b) and mirtazapine (Arnone et al. Reference Arnone, Horder, Cowen and Harmer2009). Thus it is possible that early effects to produce positive biases in emotional memory might be a common property of treatments that possess efficacy in clinical depression. This is consistent with the key role that cognitive formulations of depression attach to negative memory biases in the maintenance of depressive states (e.g. Beck et al. Reference Beck, Rush, Shaw and Emery1979).

Conventional antidepressant drugs also produce evidence of positive emotional biases in attention and perception with single-dose administration (Harmer et al. 2003 a, b; Browning et al. Reference Browning, Reid, Cowen, Goodwin and Harmer2007); however, HDNI treatment did not influence these processes as judged by the facial expression recognition or dot-probe tasks. Further work will be needed to establish the clinical implications of this more restricted profile of action of HDNI treatment. For example, it may mean that HDNI has a rather weaker antidepressant effect than monoamine-potentiating agents. Alternatively it could suggest that the clinical efficacy of HDNI is restricted to depressive states, which are particularly associated with memory biases, and not extend into anxiety disorders which appear to be more dependent on early attentional and perceptual biases. Characterization of the effects of repeated treatment with HDNI is needed to evaluate this further.

P. J. Cowen has served as a paid member of advisory boards for DSM, Eli Lilly, Lundbeck, Sevier, Wyeth, and Xytis. C. J. Harmer is on the advisory board of P1vital and has received consultancy fees from Servier, P1vital, Lundbeck, GSK, and Merck-Sharpe and Dohme. She holds shares in P1vital.