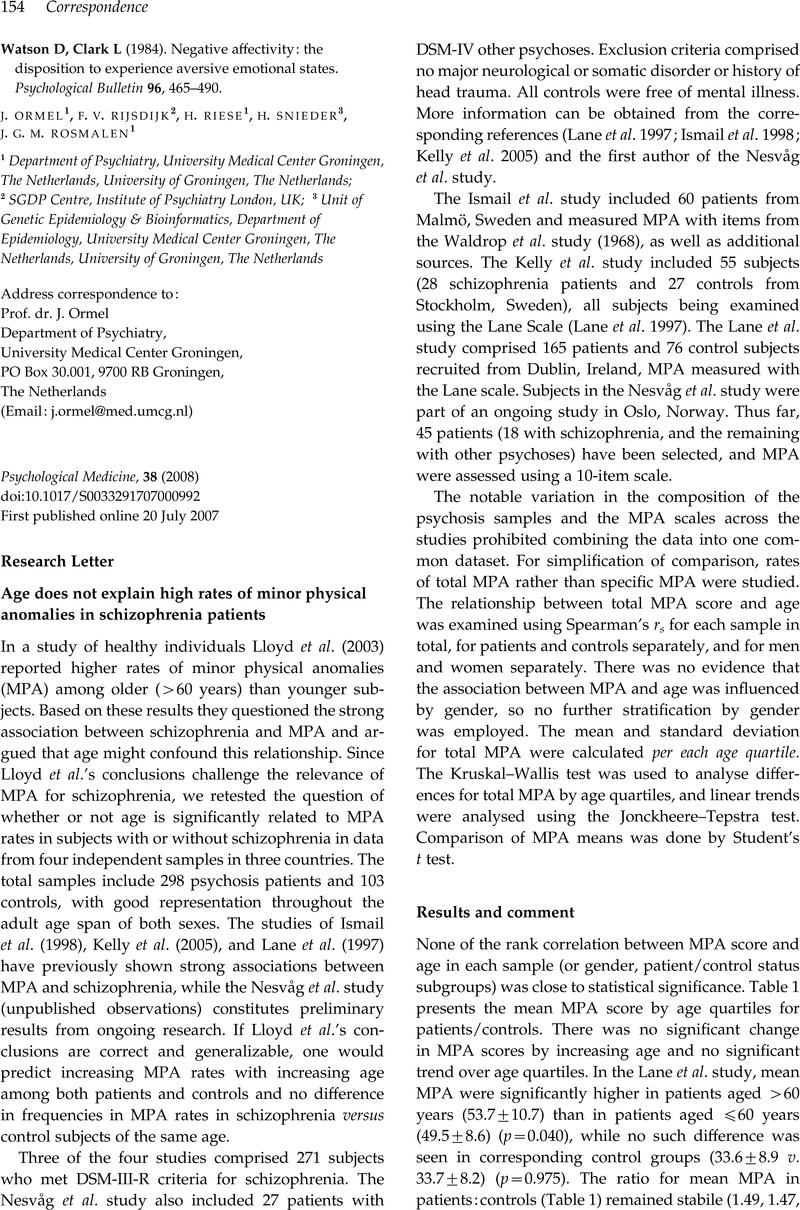 In a study of healthy individuals Lloyd et al. (Reference Lloyd, Doody, Brewin, Park and Jones2003) reported higher rates of minor physical anomalies (MPA) among older (>60 years) than younger subjects. Based on these results they questioned the strong association between schizophrenia and MPA and argued that age might confound this relationship. Since Lloyd et al.'s conclusions challenge the relevance of MPA for schizophrenia, we retested the question of whether or not age is significantly related to MPA rates in subjects with or without schizophrenia in data from four independent samples in three countries. The total samples include 298 psychosis patients and 103 controls, with good representation throughout the adult age span of both sexes. The studies of Ismail et al. (Reference Ismail, Cantor-Graae and McNeil1998), Kelly et al. (Reference Kelly, Lane, Henriksson, Agartz and McNeil2005), and Lane et al. (Reference Lane, Kinsella, Murphy, Byrne, Keenan, Colgan, Cassidy, Lloyd, Doody, Brewin, Park and Jones1997) have previously shown strong associations between MPA and schizophrenia, while the Nesvåg et al. study (unpublished observations) constitutes preliminary results from ongoing research. If Lloyd et al.'s conclusions are correct and generalizable, one would predict increasing MPA rates with increasing age among both patients and controls and no difference in frequencies in MPA rates in schizophrenia versus control subjects of the same age.

The notable variation in the composition of the psychosis samples and the MPA scales across the studies prohibited combining the data into one common dataset. For simplification of comparison, rates of total MPA rather than specific MPA were studied. The relationship between total MPA score and age was examined using Spearman's r s for each sample in total, for patients and controls separately, and for men and women separately. There was no evidence that the association between MPA and age was influenced by gender, so no further stratification by gender was employed. The mean and standard deviation for total MPA were calculated per each age quartile. The Kruskal–Wallis test was used to analyse differences for total MPA by age quartiles, and linear trends were analysed using the Jonckheere–Tepstra test. Comparison of MPA means was done by Student's t test.

None of the rank correlation between MPA score and age in each sample (or gender, patient/control status subgroups) was close to statistical significance. Table 1 presents the mean MPA score by age quartiles for patients/controls. There was no significant change in MPA scores by increasing age and no significant trend over age quartiles. In the Lane et al. study, mean MPA were significantly higher in patients aged >60 years (53·7±10·7) than in patients aged ⩽60 years (49·5±8·6) (p=0·040), while no such difference was seen in corresponding control groups (33·6±8·9 v. 33·7±8·2) (p=0·975). The ratio for mean MPA in patients:controls (Table 1) remained stabile (1·49, 1·47, 1·48) across the first three age quartiles but increased (to 1·60) in the oldest quartile.

Table 1. Mean MPA score and standard deviation per age quartile for the participants in the four independent samples included in this study 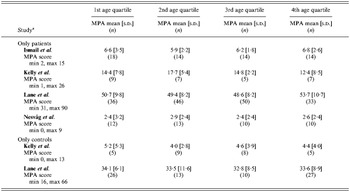 a Min(imum) and max(imum) refer to lowest and highest scores that occurred in that sample.

In the literature, we found 11 frequently cited studies providing evidence for the existence of an increase in MPA among schizophrenia patients. Two of these did not, however, present the participants' age. Subject age was <55 years in five studies and <60 years in one further study. Of the remaining studies that included subjects aged >60 years, two actually had higher mean age for the controls than patients, while the third study showed no age differences.

No significant relationship was observed between MPA rate and age across all ages in any study. Patients (but not controls) aged >60 years had significantly but modestly increased MPA scores, paralleling Lloyd et al.'s finding in normal controls of similar age. With greater power this might point towards a possible increase of MPA in all older ages, but it would not explain the consistent differences in rates of MPA in schizophrenia patients, compared to equally aged controls. If it were of interest to investigate the frequencies of MPA in schizophrenia subjects aged >60 years, it would require a study design which includes older subjects with and without schizophrenia.

A literature search was done in order to determine whether the apparent increase of MPA in subjects aged >60 years represents a true confounding in the studies constituting evidence for the association between MPA and schizophrenia. Only three of the nine studies that were identified included subjects aged >60 years, and the mean age of schizophrenia patients was lower than, or the same as, that for controls.

Thus, nothing suggests that high subject age provided a confounding towards increased MPA rates in schizophrenia patients. The current findings give no reason to reconsider earlier consistent and robust findings of increased rates of MPA in schizophrenia versus controls in a number of studies over the years.

This study was supported by grants from the Stanley Medical Research Institute USA (grant no. 98-313), the NIMH USA (grant no. MH18857), the Swedish National Research Council (grant nos 3793 and 5845), and the Wallenberg Foundation.