User, client or patient: what do we call people receiving treatment for mental health problems? 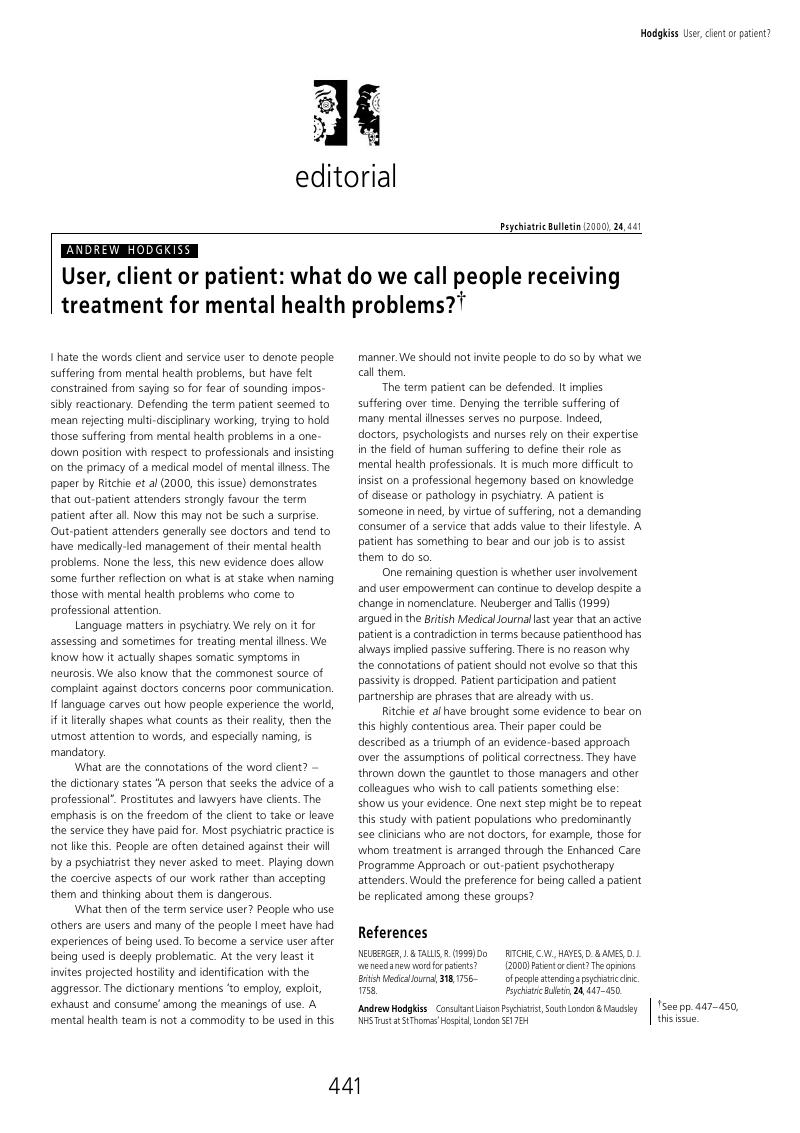 An abstract is not available for this content so a preview has been provided. To view the full text please use the links above to select your preferred format.
Type
Editorial
Information
Psychiatric Bulletin , Volume 24 , Issue 12 , December 2000 , pp. 441
DOI: https://doi.org/10.1192/pb.24.12.441[Opens in a new window]
Creative Commons
This is an Open Access article, distributed under the terms of the Creative Commons Attribution (CC-BY) license (http://creativecommons.org/licenses/by/4.0/), which permits unrestricted re-use, distribution, and reproduction in any medium, provided the original work is properly cited.
Copyright
Copyright © 2000, The Royal College of Psychiatrists

I hate the words client and service user to denote people suffering from mental health problems, but have felt constrained from saying so for fear of sounding impossibly reactionary. Defending the term patient seemed to mean rejecting multi-disciplinary working, trying to hold those suffering from mental health problems in a one-down position with respect to professionals and insisting on the primacy of a medical model of mental illness. The paper by Ritchie et al (Reference Ritchie, Hayes and Ames2000, this issue) demonstrates that out-patient attenders strongly favour the term patient after all. Now this may not be such a surprise. Out-patient attenders generally see doctors and tend to have medically-led management of their mental health problems. None the less, this new evidence does allow some further reflection on what is at stake when naming those with mental health problems who come to professional attention.

Language matters in psychiatry. We rely on it for assessing and sometimes for treating mental illness. We know how it actually shapes somatic symptoms in neurosis. We also know that the commonest source of complaint against doctors concerns poor communication. If language carves out how people experience the world, if it literally shapes what counts as their reality, then the utmost attention to words, and especially naming, is mandatory.

What are the connotations of the word client? - the dictionary states “A person that seeks the advice of a professional”. Prostitutes and lawyers have clients. The emphasis is on the freedom of the client to take or leave the service they have paid for. Most psychiatric practice is not like this. People are often detained against their will by a psychiatrist they never asked to meet. Playing down the coercive aspects of our work rather than accepting them and thinking about them is dangerous.

What then of the term service user? People who use others are users and many of the people I meet have had experiences of being used. To become a service user after being used is deeply problematic. At the very least it invites projected hostility and identification with the aggressor. The dictionary mentions ‘to employ, exploit, exhaust and consume’ among the meanings of use. A mental health team is not a commodity to be used in this manner. We should not invite people to do so by what we call them.

The term patient can be defended. It implies suffering over time. Denying the terrible suffering of many mental illnesses serves no purpose. Indeed, doctors, psychologists and nurses rely on their expertise in the field of human suffering to define their role as mental health professionals. It is much more difficult to insist on a professional hegemony based on knowledge of disease or pathology in psychiatry. A patient is someone in need, by virtue of suffering, not a demanding consumer of a service that adds value to their lifestyle. A patient has something to bear and our job is to assist them to do so.

One remaining question is whether user involvement and user empowerment can continue to develop despite a change in nomenclature. Neuberger and Tallis (Reference Neuberger and Tallis1999) argued in the British Medical Journal last year that an active patient is a contradiction in terms because patienthood has always implied passive suffering. There is no reason why the connotations of patient should not evolve so that this passivity is dropped. Patient participation and patient partnership are phrases that are already with us.

Ritchie et al have brought some evidence to bear on this highly contentious area. Their paper could be described as a triumph of an evidence-based approach over the assumptions of political correctness. They have thrown down the gauntlet to those managers and other colleagues who wish to call patients something else: show us your evidence. One next step might be to repeat this study with patient populations who predominantly see clinicians who are not doctors, for example, those for whom treatment is arranged through the Enhanced Care Programme Approach or out-patient psychotherapy attenders. Would the preference for being called a patient be replicated among these groups?

User, client or patient: what do we call people receiving treatment for mental health problems?
×

User, client or patient: what do we call people receiving treatment for mental health problems?
×

User, client or patient: what do we call people receiving treatment for mental health problems?
×
×